A dog surfing competition held in Del Mar, Calif. on Sunday was won by Buddy, a hall of fame pooch who has won the past five contests.

The sixth annual Surf Dog Surf-A-Thon, which is the largest of such competitions in the country, raised a record $100,000 for the Helen Woodward Animal Center in San Diego.

The event attracted more than 4,000 spectators who lined the beach to watch life jacketed-dogs ride the waves. The pets were divided into four weight classes and 80 dogs entered the competition, many of them going tandem on their surf boards.

Buddy, a 14-year-old Jack Russell Terrier owned by Bruce Hooker, was inducted into the Dog Surfing Hall of Fame following the race. He will likely retire from competition.

“That last heat was probably the best of Buddy’s life,” said Hooker at the induction ceremony, “Helen Woodward Animal Center hosts the best Surf Dog Competition and we are so proud to represent.”

For his victory, Buddy was given the “Best in Surf” trophy, along with a year’s supply of Eukanuba pet food and a Pet Tracker device.

The contest was judged by Tyana Alvarado from NBC’s “The Apprentice,” Craig Silke from ABC’s “The Mole” and Dennis Luciani from NBC’s “Average Joe.”

But, it was an Australian Kelpie named Abbie’G who set the Guinness World Record for the longest surf ride by a dog. Abbie’G rode for 65 yards at Huntington Beach on Sunday. 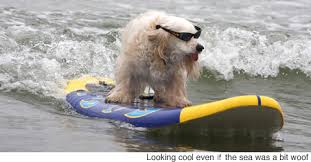