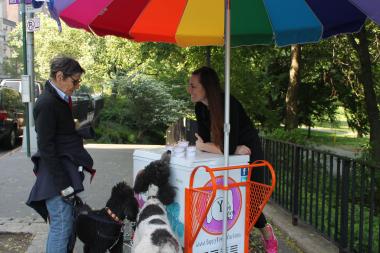 UPPER WEST SIDE — Frozen treats specially made to keep dogs cool will debut this weekend with the city’s first Mister Softee-style truck for pooches.

They come in flavors designed to tempt the canine taste buds — including tuna-carrot and peanut butter-banana-carob.

Diaz will be taking the cart into Riverside and Central parks this weekend, parking outside the West 72nd Street dog park, Mariner’s Playground and at West 84th Street and Central Park West — spots she thinks will yield lots of hungry pups.

Her license from the Parks Department, the first for such a cart, arrived just this week, bringing a year’s worth of dreaming, negotiating and yogurt-making to fruition.

Diaz brought the shiny new cart to a charity event this week and turned a lot of heads en route, she said.
“It gets people excited,” she said. “It definitely is a new concept. Very few people have seen [a dog ice cream cart].”

Deciding when to station the cart in the parks will be a bit of trial and error, Diaz said. But like other food carts, she’ll be tweeting her times and locations from her twitter handle @YappyTreatsCart.

For now, the Parks Department has given Diaz a 29-day permit, which she’ll use every Saturday and Sunday this summer. She hopes that if the trial goes well, she’ll secure a permanent permit.

The company would not have been possible without the help of her own furry friends, her 8-year-old Afghan Hound Sisu and her Weimeraner Merlin. The pair proved invaluable when it came to taste-testing flavors.

“Sisu is the spokesdog and Merlin is the VP of quality control,” she joked.

If you miss the cart this weekend, it will be stationed at 67 Wines on June 5 for an event for pets and owners to benefit the animal shelter Bideawee, from 4 to 7 p.m.