LOS ANGELES – They still fight like cats and dogs in divorce court. But more and more they are fighting about cats and dogs. 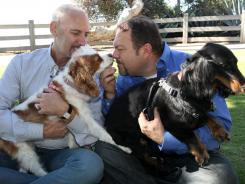 In a 2006 survey by the 1,600-member American Academy of Matrimonial Lawyers, a quarter of respondents said pet custody cases had increased noticeably since 2001. The academy is due for another survey, but there is no doubt such cases have grown steadily since then, said Ken Altshuler of Portland, Maine, a divorce attorney and AAML president.

If there is a child involved in a divorce, many judges will keep the pet with the child, attorneys said.

“But what do you do when the pet is the child?” Altshuler asked.

Pet custody cases have grown as much as 15 percent in his office over the last five years, said attorney David Pisarra of Santa Monica.

He is his own best example. He shares custody of 8-year-old Dudley, a longhaired standard black-and-tan dachshund, with his ex, who has remarried and introduced a step-dog to Dudley.

Pet consultant Steven May hired Pisarra six years ago to handle his divorce. Besides a daughter, May and his ex worked out custody of three dogs, two cats and Tequila the parrot.

Pisarra and May became good friends and often take their dogs for walks in Santa Monica. They also teamed up last year to write a book about co-parenting a pet with an ex titled “What About Wally?”

Pets are considered property in every state in the country. For years, they have been divvied up like furniture during divorce proceedings. But times are changing.

“Judges are viewing them more akin to children than dining room sets. They are recognizing that people have an emotional attachment to their animals,” Altshuler said.

“There is a shifting consciousness,” Pisarra said. “Pets are being given greater consideration under the law.”

More people have pets than ever before and they consider them part of the family rather than possessions, said Silvana Raso, a family law attorney with the Englewood Cliffs, N.J., law firm of Schepisi & McLaughlin.

“People are not embarrassed to fight for custody of a pet today. In the past they might have shied away from it because society didn’t really accept a pet as anything other than an accessory to your life,” she said.

When Pisarra and Jay Redd (who wrote an introduction in the book) split up, they agreed to share Dudley.

“There is no law that recognizes visitation with an animal,” Raso said, so couples have to work it out themselves.

Reaching a pet custody agreement without a lot of help from attorneys and judges will save money, Raso said. Divorces can cost $1,000 and be resolved quickly or cost millions and take years.

Pet decisions are often more agonizing to make than those about mortgages, credit card debt or student loans, Raso said. But if they can be resolved, the rest usually goes smoother.

After their 2006 breakup, Pisarra and Redd worked out shared custody, long-distance visitation and a new family (including a beagle) in Dudley’s life, Pisarra said. Today, they live in the same city, so visitation no longer includes flight time.

The two have a plan for everyday, vacation and holiday schedules, travel arrangements, doggie daycare, boarding, food, treats, grooming, vet care, moving and end-of-life decisions. They split costs and sometimes, with things like toys, leashes and dog bowls, they buy two of each so Dudley has one at each home.

May and his wife Nina (who also wrote an introduction for the book) separated six years ago after 16 years of marriage. “Everything was fresh and raw. It was not easy.”

It’s taken time, but he and his ex live about two miles apart in West Los Angeles now and sharing custody of their daughter and pets is easy, he said. To make it work, “you learn the true meaning of concession,” May said.

The three dogs the couple had then have died, but Winnie, his 3-year-old Cavalier King Charles spaniel, is very much like a family pet, said May, a consultant to veterinary and other pet-related companies.

Most of the time, custody battles grow out of love. But there are cases rooted in spite or retaliation.

Pisarra represented a man whose estranged wife had the family’s two German shepherds euthanized. “They were his running dogs. It was really cruel and he had no recourse,” he said.

In years past, pets could not be protected in domestic violence restraining orders in any state. But because abusers can use pets to threaten victims, maybe even kill the animals, the laws have changed in states like Maine, New York, California and Illinois. Other states are looking into changes. And there will be changes in other laws too, Altshuler predicted.

He believes there will one day be statutes for pets, much like there are for children, giving judges guidelines to rule by.