In May 1999, Donnie Kanter Winokur, 43, a writer and multimedia producer, and her husband, Rabbi Harvey Winokur, 49, beheld the son of their dreams, the child infertility denied them. Andrey, a pale dark-eyed 1-year-old in a cotton onesie, held in a standing position by a caregiver, appeared in a short videotape recorded in a Russian orphanage. If the couple liked the little boy, they could begin the legal process of adopting him. They liked the little boy very much. 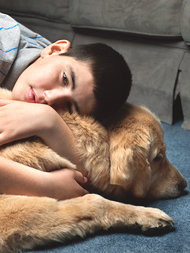 Four months later, the Winokurs flew to Russia from their home in Atlanta to adopt Andrey, whom they renamed Iyal, and to adopt an unrelated little girl two days younger, whom they named Morasha. All four appear in another orphanage video: the beaming new parents on the happiest day of their lives, the toddlers passive in the arms of the strangers cradling and kissing them. In August 1999, the family arrived home to congratulations, gifts and helium balloons.

“Sometime after their 3rd birthdays, our wonderful fairy tale of adopting two Russian babies began to show cracks,” said Donnie Winokur, who is now 55. She is pert and trim, with cropped brown hair and a pursed-lips, lemony expression softened by wearying experience. Unlike bright and cheery Morasha, Iyal grew oppositional and explosive. He was a sturdy, big-hearted boy with a wide and open face, shiny black hair in a bowl cut and a winning giggle. But, triggered by the sight of a cartoon image on a plastic cup, or an encounter with Morasha’s Barbie dolls, he threw tantrums that shook the house. He stuffed himself at mealtimes with an inexplicable urgency. In a fast-moving car, he unfastened his seat belt and tried to jump out. He awoke every night in a rage. “I had panic attacks in the night when I heard him coming,” she said. “I assumed everything was my fault, that I was not a good-enough mother.” In preschool, Iyal plowed his tricycle into other children without remorse, or maybe without awareness. He tried to kiss strangers, or feel their toes. Friends and congregants (Harvey Winokur is the founding rabbi of Temple Kehillat Chaim in Roswell, Ga.) who had assured the Winokurs, “He’s all boy!” or “Mine was the same way!” began to fall silent, out of shared concern.

The rabbi wears a carefully trimmed brown beard, wire-rim glasses and a commiserative expression. “Iyal’s disabilities began to define our family’s existence,” he told me.

We sat in their high-ceilinged kitchen in a suburb of Atlanta on a summer Sunday morning; sliding glass doors opened onto a redwood deck filled with flowers and bird feeders. Morasha, 13, cute and sporty, packed her pool bag for an outing with friends; Iyal, 13, played a video game alone in the den but checked in frequently, anxiously, to know when his mother’s crumb cake would come out of the oven. Earlier that day, Morasha played the video game with her brother. In a realm in which they searched side by side for hidden treasure, there was peace between them. “Iyal, push the green button!” she ordered. “The green button! Iyal, steer the canoe!” He obeyed. But outside this virtual kingdom, he doesn’t listen to her, especially when she begs him to leave her alone or to get out of her room. It’s stressful for a young teenage girl to navigate middle school with a large inept brother lumbering through the same hallways, the target of gibes and ridicule.

For more than a year after Iyal’s 3rd birthday, child psychiatrists, pediatricians and specialists examined him without reaching consensus. Finally he was seen by Alan G. Weintraub, a developmental pediatrician, who noted his small head, the small and widely spaced eye openings, the extra skin folds close to the nose and the way the middle area of his face appeared flattened. When the little boy became anxious during the exam, he began making animal noises­ and tried to escape. He detected scary themes in benign pictures. The doctor’s conclusion was a blow the Winokurs had not seen coming: Iyal’s brain and central nervous system had been severely, irreversibly damaged in utero by the teratogen of alcohol, resulting in an incurable birth defect. Though alcohol consumption by Iyal’s birth mother could not be documented, the available evidence pointed to fetal alcohol syndrome, F.A.S., the most extensive form of the range of effects known as fetal alcohol spectrum disorders, or F.A.S.D.

It is well known that maternal drinking can lead to neurobehavioral and growth impairments in a fetus, as well as malformations in the face, palate, joints, kidneys, genitals, heart, brain and nervous system. There is no known safe window during pregnancy for alcohol consumption of any kind or quantity, according to Dr. Jacquelyn Bertrand of the National Center on Birth Defects and Developmental Disabilities of the Centers for Disease Control and Prevention. The U.S. surgeon general calls for total abstinence. C.D.C. estimates of the prevalence of F.A.S. in America range from 0.2 to 1.5 children per 1,000 live births, but this data may represent chiefly those children whose facial dysmorphia render them recognizable; the rest may appear physically typical while contending with hidden neurological damage.